If you are a gamer you probably know about Minecraft. It’s the sandbox building & crafting game with the comically blocky 3D graphics that has been snowballing in popularity since 2009. It is already probably the most successful independent game of all time, with over 3 million sales so far and making it’s creator Notch a seriously rich man (just checked the stats and over 13000 people have purchased the game, netting a cool £160,000, in the last 24 hours!).

I like Minecraft, it’s got bags of charm and gameplay that encourages creativity in a way that is strangely compulsive. Definately worth the £12 or so I paid for it. But here’s the thing that makes the runaway success of Minecraft so unusual: the game isn’t finished yet. 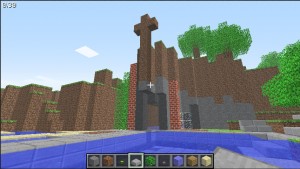 Since it made it’s debut in 2009 it has been in beta version (version 1.8 is just about to drop as I write this). You pay for the game in full, play it in it’s unfinished state and when it is ‘finished’ it is yours, no extra to pay.

This somewhat unorthodox business model is one that Minecraft’s legions of fans seems perfectly happy with. In the mainstream gaming world games companies face the unending wrath of their customers for daring to release games with the occasional bug in. There are fewer more damning words of criticism for a game than saying it has been released ‘unfinished’.  Yet with Minecraft its unfinished state has been turned into one of its main selling points, with forums a-buzz with excitement with speculation about which bugs will be fixed and new features added in each patch. In a way people are buying it on the gamble the what is a good game now will be an excellent game in the future.

Which brings us to the awkward question: will it be possible for the game to ever be finished? With so much of the buzz about the game riding on speculation about future features, will Notch and his crew be able to say “That’s it. Game’s finished. No more updates”? Would it make sense for them to do this and would the fans accept this if they did?

The nearest equivalent I can think of is World of Warcraft, where the game’s community thrives on the regular updates and new features added to keep the game fresh.  However, WoW’s players pay monthly for the priviledge while Minecraft is just a one-off payment that is good for life.

Probably such considerations didn’t even cross Notch’s mind when he debuted Minecraft, after all how could he have predicted such an unprecidented a level of success?